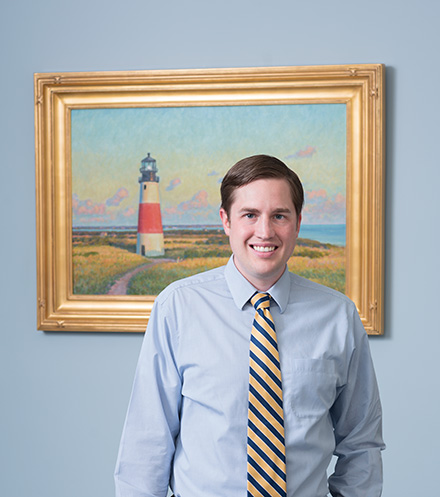 Chase Sandridge is an attorney with the firm. He has worked with Virginia Wills, Trust and Estates since 2015, first as a paralegal, then while attending law school as a Summer Associate. Chase received his J.D. from Liberty University School of Law in Lynchburg, Virginia, and is a member of the Virginia State Bar.

While at Liberty, he assisted with the Volunteer Income Tax Assistance program and served on the school’s Alternative Dispute Resolution Board.

Chase earned his undergraduate degree from James Madison University in Harrisonburg, Virginia, where he majored in Marketing.

As a fifth-generation resident of western Albemarle County, Chase is deeply committed to his community. One way that Chase gives back is through the Crozet Volunteer Fire Department where he has been an active member since 2003. Currently serving as a Captain with the fire department, Chase has also served as a Lieutenant and on the department’s Board of Directors. Chase is a third-generation volunteer fireman in Crozet, serving alongside his father, uncles and grandfather.

When not practicing law or volunteering at the fire department, Chase enjoys spending time with his wife Grace, and their two cocker spaniel puppies. He is a lifetime fan of the University of Virginia Cavaliers athletic teams. Attending the 2019 Final Four in Minneapolis is the high water mark in Chase’s life as a Wahoo sports fan.